skip to main | skip to sidebar

READ THE POST BELOW, FIRST
Then watch his son in this vid. Asskicking.

Baby got some MOVES on him, and love that bulletproof hair. Legs are going all OVER the damn place, and I think he had an epileptic seizure mid chorus, but DAYUM if this dude isn't fine. He's probably 92 years old now, but back in the day he was all kinds of monkey love. What's the deal with his disarticulated legs? I don't care-I want to get into a time machine and party with him 'till it's 1969.

THANKSGIVING
And this is what I'm thankful for: 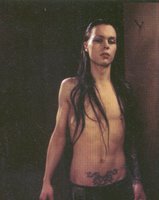 I CAN BARELY DRAW A SMILEY FACE
Fantastic.

PERHPAS THE MOST BRILLIANT EXPOSE EVER.
My sistah Ann in Columbus is a veritable keyboard Shakespeare. 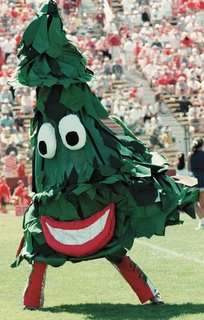 A rant regarding school mascots.
And that's all I have to say.
Read it here
Posted by Lola at 8:45 PM No comments:

A SCENE FROM ONE OF MY FAVORITE MOVIES

Does it get better than this?

Shakes The Clown
Posted by Lola at 4:27 PM No comments: 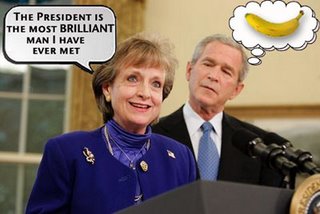 Since 1982 the English Department at San Jose State University has sponsored the Bulwer-Lytton Fiction Contest, a whimsical literary competition that challenges entrants to compose the opening sentence to the worst of all possible novels.
Bulwer Lytton

Winner:
Detective Bart Lasiter was in his office studying the light from his one small window falling on his super burrito when the door swung open to reveal a woman whose body said you've had your last burrito for a while, whose face said angels did exist, and whose eyes said she could make you dig your own grave and lick the shovel clean.

Runner-Up:
"I know what you're thinking, punk," hissed Wordy Harry to his new editor, "you're thinking, 'Did he use six superfluous adjectives or only five?' - and to tell the truth, I forgot myself in all this excitement; but being as this is English, the most powerful language in the world, whose subtle nuances will blow your head clean off, you've got to ask yourself one question: 'Do I feel loquacious?' - well do you, punk?"

Dishonorable Mentions:
It was a day, like any other day, in that Linus got up, faced the sunrise, used his inhaler, applied that special cream between his toes, wrote a quick note and put it in a bottle, and wished he'd been stranded on the island with something other than 40 cases each of inhalers, decorative bottles, and special toe cream.

The cold, cynical wind molested the auburn tresses of the fair damsel clinging to the steel of the rail trestle, from which vantage point she could see that it was a long way down to where she would land if she fell, which, given the velocity she would attain and the unfriendly pavement leering up at her, added to soft tissue's low tolerance for sudden impacts, would be a very bad thing.

Nick Stiletto, a three-inch ash hanging from his generic P&Q-brand cigarette, squinted through the wispy smoke across the nicked linoleum-covered table at the man in the blue suit, wondering why he had gone into private detection when he could have easily inherited his father's cat-stretching business in Peoria.
Posted by Lola at 8:10 AM 2 comments:

Bright be the Place of Thy Soul

So, I went to visit a friend today. It's been exactly one year since I'd last seen him. His new home has the best view in San Diego - breathtaking in scope, magnificent in spectrum. I was overwhelmed with emotion being there with him. I had forgotten how much I enjoyed his company, and how I had taken his friendship for granted. It's funny the excuses we make for not returning calls, for not following through with plans made to spend time together, for letting friendships slip through our fingers because we had better, or more important things to do. I am guilty of this, and I hate it about myself. I am not that great a friend, or sister, or daughter. I could be so much better.

It was hard being with him today, and spending time with his extended family, whom I love from the bottom of my heart. I've been amiss with them, guilty of fogetting to call, finding better things to do than spend an afternoon or evening with them, just hanging. I think I'll talk about it with God tonight, and see if He can help me through this one, and if He'll give me the faith to become the kind of friend many of MY friends are to me.

Kelly's new pad is awesome. I was sad to leave him, but I knew he had more company than I could comprehend, and that made me even sadder. That 20 year old kid next door to him, and the 18 year old one a few doors down. Older folks everywhere. I know he's not alone there, but it still hurt to leave. I miss him. It hurts a little when I breathe. 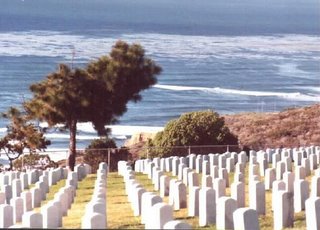 Miss you Kelly. 'Riah, little Kelly and Mekhi are hanging in there. 'Cedes is having a harder time.
Angie is surviving.

I'm going to get out and see you more often.
I promise.

...Young flowers and an evergreen tree
May spring from the spot of thy rest:
But nor cypress nor yew let us see;
For why should we mourn for the blest?
~Lord Byron
Posted by Lola at 7:53 PM 1 comment:

REASON NUMBER ONE WHY I'M NOT INTO P#SSY 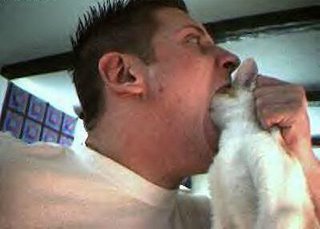 JEANNETTE, Pa. -- Meow. A Pennsylvania judge is being asked to decide whether that word is a harmless taunt or grounds for misdemeanor harassment.

Police have charged a 14-year-old boy with that crime. Michael Loughner is accused of meowing whenever he sees his 78-year-old neighbor, Alexandria Carasia.

The boy's family got rid of their cat after Carasia complained that it was using her flower garden as a litter box. Now, she said, the boy makes meowing sounds every time he sees her.


He said he's only meowed at her twice.

"I've had to put up with this for three years," Carasia said. "As I walk by, I see Michael and his mother. He got on the porch and hid behind the bamboo screen and starts meowing. If I don't make this stop now, they're going to keep doing this to me. I shouldn't have to worry about walking out of the house and being harassed by this young kid."

Loughner said that on July 23 he went out to hold his dog so it wouldn't leave the yard as Carasia walked by.

"She was walking through and she kept looking at us," he testified. "I grabbed the dog so it wouldn't leave the yard. When I put my head down, I meowed."

He said that was one of the two times he's ever meowed at the woman, the Pittsburgh Tribune Review reported.

"As she walked in front of the house, nothing was said," the boy's mother, Sally Loughner, told the court. "He stepped off the porch to make sure the dog didn't get out. As he reached down and got the dog, he said, 'Meow.' ... She said, 'Do you want me to call the cops again?' I said, 'Go ahead, he hasn't done anything wrong.'"

There is a history of disputes between the neighbors, according to the paper.

Sally Loughner told the court that she ended up sending her cat to live with family members so that she could "keep peace in the neighborhood."

"This should never have been filed," Martin said. "This is not something that police should be wasting their time with or wasting the court's time."

The judge heard from both parties Tuesday. He decided to wait 90 days before ruling, saying he'll decide what to do after seeing how the boy and his neighbor get along in the meantime.
Posted by Lola at 9:46 PM 2 comments: